Sprig not only enables you to understand and monitor your overall customer experience; it also gives you the ability to launch ad hoc surveys at any time to find answers to your most pressing user questions.

Through our own experience, as well as conversations with Sprig customers across a variety of industries, we've found that there are 4 ways to use ad hoc surveys that consistently produce actionable insights that drive growth.

Journey progression and conversion surveys focus on understanding how to move customers through the funnel to increase revenue. Using Sprig's custom journey framework, companies can identify key conversion or journey progressions events, such as signups, onboarding completion, purchase, or subscription renewal, and trigger surveys when these events occur (or fail to occur).

For example, perhaps you've noticed that many users who sign up with your product drop off before completing onboarding and you aren't sure why. This is exactly the challenge Plann faced when the Instagram management tool launched its desktop app. The team needed to understand why visitors weren’t coming back and identify actions they could take to improve results.

Plann turned to Sprig and quickly launched two micro-surveys to help them understand their customers' experiences.

Through these surveys, the Plann team was able to identify its biggest opportunities with almost no effort, allowing them to move quickly to implement solutions rather than spending time and energy identifying problems.

Having access to prioritized insights about the customer experience during onboarding led the Plann team to implement changes that removed friction, which improved conversion by 22%.

Onboarding is just one of the many types of journey progression and conversion events you can use Sprig to understand. Sprig customers also use ad hoc micro-surveys to increase signups, lower churn rates and improve purchase conversion.

Profiling surveys are intended to give you a more complete picture of your user base than behavioral data alone can provide. For example, you may want to collect demographic data, such as age, to better understand your users' goals and motivations.

One of the most commonly used profiling surveys by Sprig customers is our Customer Goals survey. This survey asks customers to choose from a list of 4-5 pre-defined goals for using your product, which can then serve as segments or personas for understanding your users. 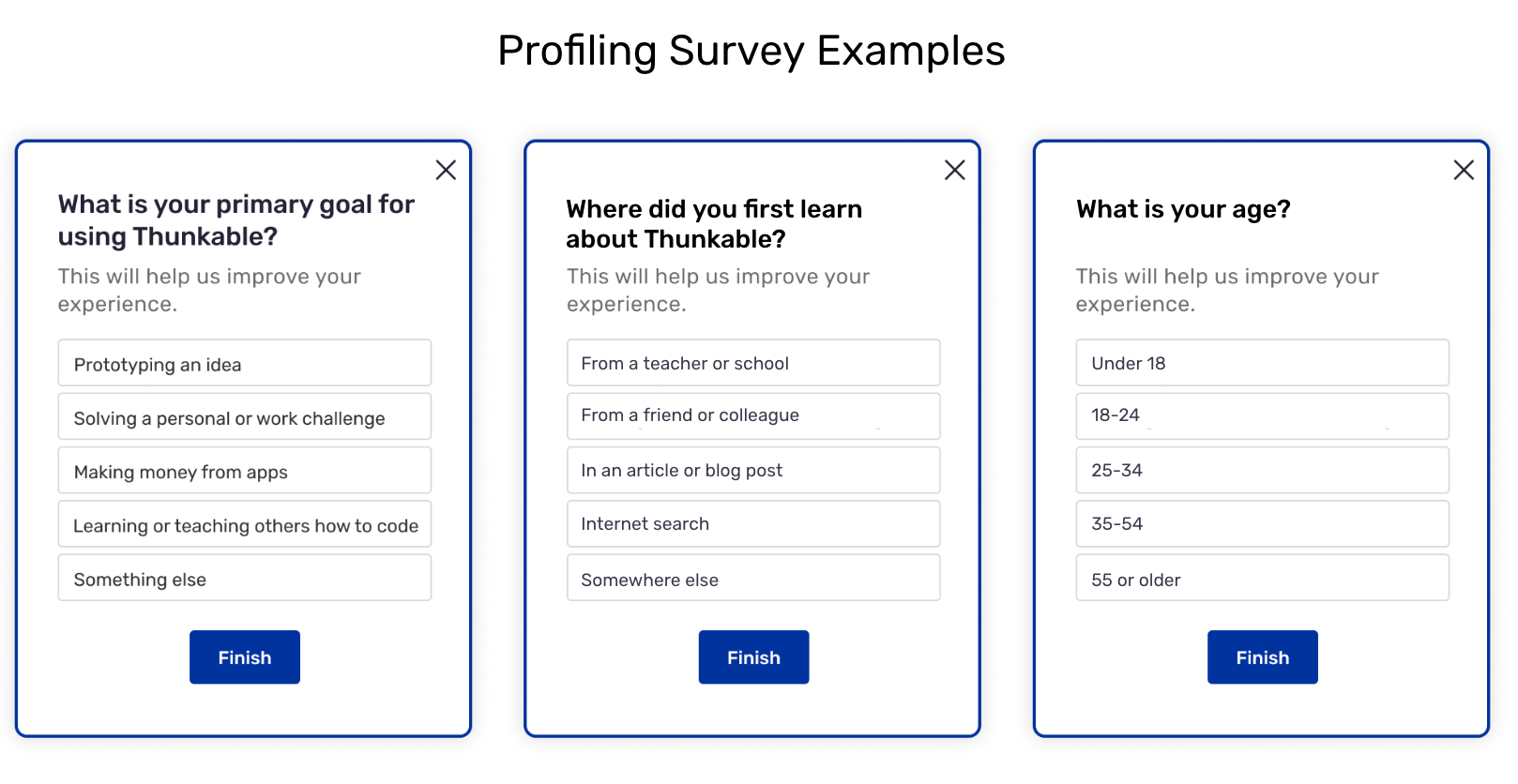 The Customer Goals survey was instrumental in the growth of Thunkable, a low-code platform designed to enable anyone to build their own mobile app. The Thunkable team realized its product, which initially launched as an educational tool, needed to pivot to appeal to a broader market. However, Thunkable was already being used by a number of audiences, so it needed to differentiate the needs and pain points of its new target segment from those of other users.

With Sprig's Customer Goals survey, Thunkable was able to identify the segments individual users represented and uncover product optimizations that offered the biggest opportunities to improve the experience for target segments. As a result of its partnership with Sprig, Thunkable has successfully increased homepage sign-ups by 20% and improve new user activation by 24%.

In addition to the goals survey, other common profiling surveys include demographics like gender, age, and device usage, as well as higher-level surveys around why a product is used (e.g., for business or personal reasons) or how users discovered the product.

User behavior surveys help you interpret the reasons behind specific actions customers take (or don't take) on your site. One of the most common questions we hear from Sprig customers is "why do users do that?"

"That" usually refers to clicking a button, toggling a setting on or off, visiting a particular page, or using a feature in an unexpected way. Using Sprig's custom event tracking, it's simple to launch surveys targeting user behavior in any of these categories.

This survey type has proven especially useful for ProGuides, an esports training platform that needed answers to unexplained user behavior. ProGuides had already run Sprig's Measure Subscriber Satisfaction survey and learned that access to pro coaches was one of the most valuable features the platform offered. Yet most of ProGuides' paid subscriber base was not utilizing the free coaching sessions that came with their subscriptions.

To solve this mystery, ProGuides launched a custom survey to identify barriers to using the coaching feature. This survey uncovered that the top reason for not using this feature was actually quite simple: users didn't know how to access it.

By making a seemingly simple change to surface the coaching feature more prominently, ProGuides could dramatically increase the value of its paid subscription and reduce churn.

This is just one example of the countless use cases for user behavior surveys. I bet you can think of a mystery behavior in your product right now that you'd love to understand. Sprig makes it possible to do so.

Finally, roadmap definition surveys help you learn more about your customers' feature preferences and priorities. These types of surveys can help you prioritize among several features you're considering focusing on or identify customer needs that you weren't previously aware of; they can also ensure that you don't invest time and effort into a feature that users don't want.

This is exactly how Sprig customers benefited from a roadmap definition survey for our own product. The team had a hunch that a particular new offering, which would be very resource-intensive to implement, would be a hit among its users. However, after launching a survey asking users how interested they would be in this feature, we quickly learned that the majority of users had no interest at all. By asking one simple question, Sprig saved hundreds of thousands of dollars and several months of lost time.

Now that you've learned about the most popular use cases for ad hoc surveys on Sprig, what survey will you launch next?

Updated about 1 month ago